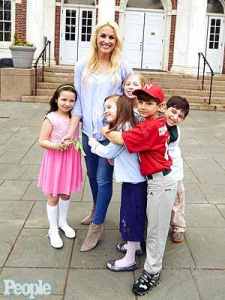 Kaitlin M. Roig-DeBellis is the Founder & Executive Director of Classes 4 Classes, Inc., a 501(c)3 organization. Classes 4 Classes is a social networking tool, for every student in the United States to learn: compassion, caring, kindness, empathy, consideration, through active engagement.

Kaitlin travels all over the world speaking to School Boards, Administrators, Teachers, Students, Non-Profit organizations, Corporations, and Conferences as a key note and commencement speaker. Kaitlin is the author of ‘Choosing Hope: Moving Forward From Life’s Darkest Hours’ published by G.P. Putnam & Penguin. In January of 2016, Kaitlin will be teaching 2 undergraduate Education courses at Bay Path University as an Adjunct Professor. Kaitlin serves on the NEAG Alumni Association Board of Directors. Kaitlin writes educational blog posts for the Huffington Post weekly. In May 2016 Kaitlin received the Ellis Island Medal of Honor for her work with Classes 4 Classes.

In October 2014, Kaitlin received the alumni association’s Humanitarian Award from her alma mater, The University of Connecticut. In May 2014, Kaitlin received two Honorary Doctorates, one of Humane Letters from Bay Path College and the other of Public Service from Luzerne College. Kaitlin delivered a TED x talk at UMass Amherst in April 2014. Kaitlin contributed to the book ‘Teaching From the Heart’ volume 2, published in May 2014. Kaitlin and Classes 4 Classes, have been featured in People, Glamour, Marie Claire, and Cosmopolitan, as well as, on World News with Diane Sawyer, Anderson Cooper, Katie Couric, Extra and Yahoo News!

In 2013 Kaitlin was honored as one of Glamour Magazine’s Women of the Year along side Nobel Prize nominee Malala Yousafzai, Congresswoman and shooting survivor Gabby Giffords, and Emmy nominated actress Kerry Washington, among others. Previous Glamour Women of the year include Former First Lady and teacher, Laura Bush and Former Secretary of State Hillary Clinton. In June 2013 Kaitlin received the Dedicated Teacher Award from The Chicago International Conference on Education.

Also in 2013, Kaitlin was honored by L’Oreal Paris one of their “L’Oreal Paris Women of Worth” of which she was one of “10 Inspiring Women Making Beautiful Differences in their Communities.